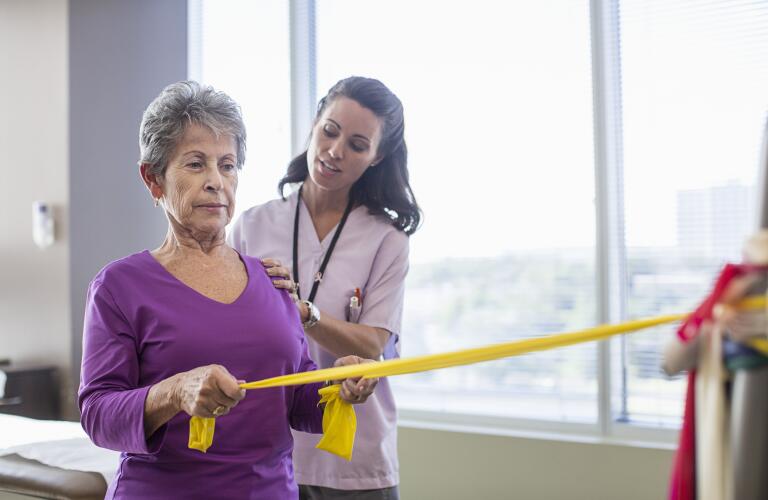 Parkinson’s disease is a neurodegenerative disease. This means the disease causes loss of neurons. In Parkinson’s, it mainly affects nerve cells in the brain that make the chemical messenger dopamine. These nerve cells transmit dopamine to control muscle movement. Parkinson’s symptoms are the result of declining dopamine levels. Early signs of Parkinson’s are usually subtle and may include tremor, stiffness, and slowed movements. Symptoms progressively worsen over time and can cause complications.

There is no Parkinson’s disease treatment that can cure the disease. However, there are still options that can help control symptoms, such as Parkinson tremor. Symptom relief can significantly improve the quality of life for Parkinson’s patients.

Medications are the main treatment for Parkinson’s disease. There is no standard way to approach medication therapy. Doctors tailor medications to meet each person’s needs. Drugs tend to be more effective in the beginning, but can lose effectiveness over time. Most people need multiple drugs to control symptoms. This can result in complicated regimens. Understanding how Parkinson’s medications work and why you need them can help you stick with the schedule.

Levodopa is a main treatment and is often a first-line choice. It replenishes dopamine levels when nerve cells in the brain convert it into dopamine. Usually, people take it as a combination product with carbidopa. Carbidopa prevents the breakdown of levodopa in the body. This allows more levodopa to reach the brain.

The combination of levodopa/carbidopa is the most effective drug treatment. However, its usefulness wears off as the disease progresses. Your response may wax and wane, with on-and-off symptom control. There are several formulations of it including:

There is also a combination product, Stalevo, that adds another type of Parkinson’s drug, entacapone (Comtan).

The main drug in this class is entacapone. It works to block an enzyme that breaks down levodopa to a useless form. Blocking this enzyme makes more levodopa available for conversion to dopamine. Entacapone is useful when levodopa’s effectiveness wears off. There is another drug in this class, tolcapone (Tasmar). But it is rarely used.

These drugs are not dopamine, but have the same actions as dopamine. They stimulate the same areas of the brain as dopamine, so the brain thinks it is getting dopamine. Dopamine agonists don’t work quite as well as dopamine. But they can help smooth out on-and-off symptoms. Drugs in this class include:

Apomorphine (Apokyn) is an injection for quick relief. It is short-acting, lasting only about an hour. It is for people who have sudden wearing-off spells.

Drugs in this class block an enzyme that breaks down dopamine. This includes both natural dopamine and the dopamine from levodopa. The result is longer-lasting dopamine effects in the brain. Doctors use these drugs in very early stages to delay the need for levodopa/carbidopa. They also use them in later stages to boost levodopa/carbidopa. Drugs include:

Anticholinergic drugs decrease the activity of acetylcholine. Acetylcholine is a chemical messenger with actions that are opposite of dopamine. When dopamine levels start falling in Parkinson’s, the effects of acetylcholine become dominant. These drugs can help restore balance between the two chemicals by decreasing acetylcholine’s effects. This helps control tremor and muscle rigidity. Drugs in this class include:

Amantadine is an older antiviral medicine. It turns out it also has effects that are useful in Parkinson’s. It can help control jerky movements.

Surgery may be an option for people who have exhausted medication options. However, it will only help improve symptoms that previously responded to levodopa. The main uses are for tremor and severe on-off fluctuations in motor control. Procedures include:

There are several lifestyle habits and alternative treatments for Parkinson’s disease. They can help relieve symptoms and make day-to-day living easier.

A recent advancement in treatment is focused ultrasound for Parkinson’s tremor. It is an option when medication is no longer effective. Even though this treatment has received FDA approval, insurance companies do not yet cover the procedure.